Dr. Ashby what is the significance of traveling to Egypt and its capacity to advance the human experience of life? Thank you 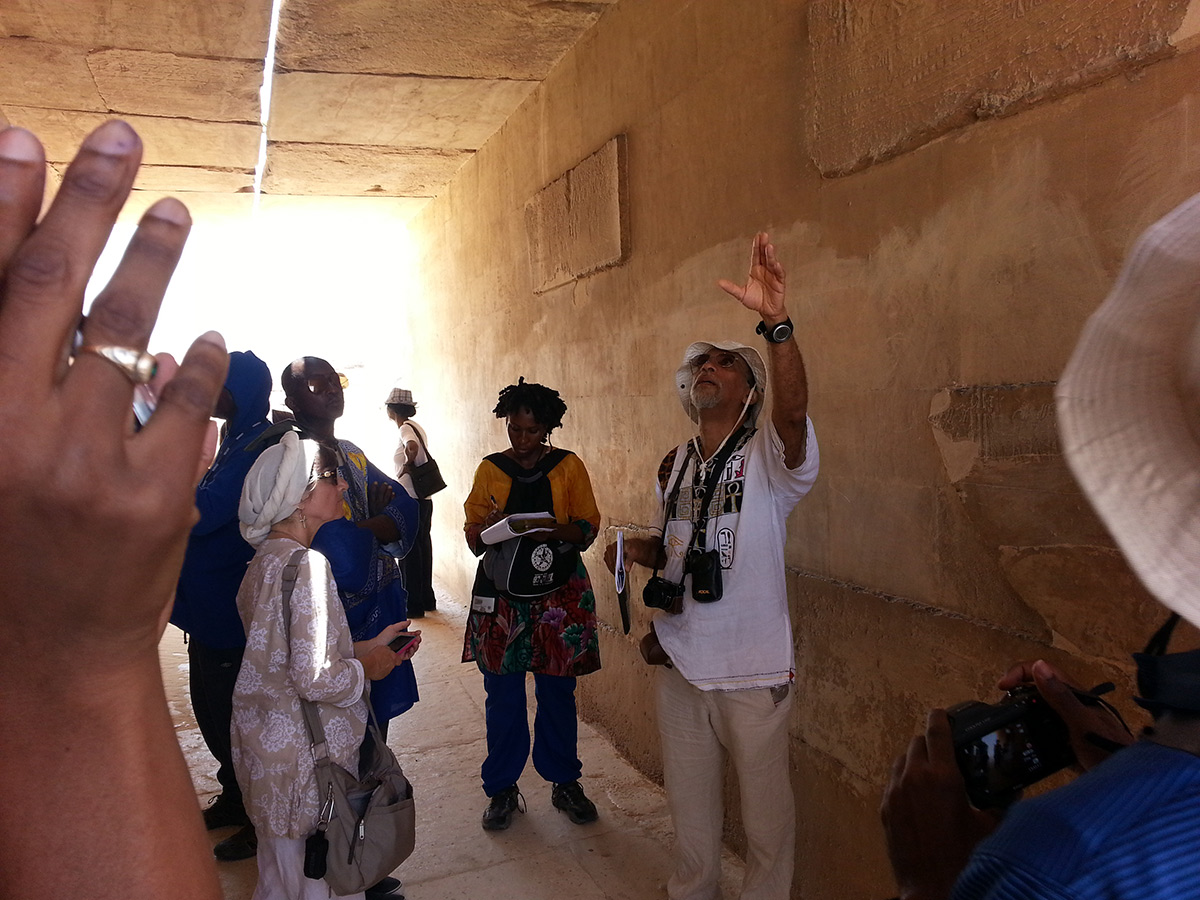 WHAT IS SPECIAL ABOUT A MYTHIC KEMET EGYPTIAN WISDOM TOUR?

There are many important challenges we face as human beings living in the world today, nuclear weapons, overpopulation, disease, war, political and economic corruption, working but not getting ahead, un-fulfilling relationships, trouble with children, pollution, oblivious self-serving politicians, and so many other challenges of life, not least of which, the looming consequences of climate change. Adding to these is the prospect of growing older and possibly getting lost in the never-ending, though fleeting problems of life and missing the true purpose of life. A wise saying is “Money Goes and Wisdom Stays.”

This means that material possessions pass away but the gains of the heart, mind and soul truly enrich us. The time and energy we, as human beings, put into working to discover the meaning of life stays with us and serves us in life and beyond. This is why the Mythic Egypt Wisdom Tour as conducted by Dr. Muata Ashby is so important. Going to visit Egypt to experience the Ancient Egyptian monuments is meant to be a transformative event and process. Yet many people, thousands of people visit Egypt every year and even now, in troubled times, and are awed but not transformed by the experience. Why?

They are not transformed because they get the awesomeness of the experience of being within the field of harmonics and metaphysical vibrations still produced by the temples but that is like visiting a computer museum and you can feel them humming away but you have no idea what they are really doing or why, since you do not understand the code by which they operate. They are computers from a different time and most people don’t have an update to be able to understand how they work, so they remain as spectacles instead of as living usable machines for today. The temples and artifacts of Ancient Egypt are, to use the modern language of computing, the hardware. Everyone who knows about computing understands that without software, the instructions to make the hardware run a process, and the logic in the software to direct the instructions to a specific goal, the computer is just an expensive paperweight or doorstop. So regardless of if you have a newer or older computer, if you are using outdated software and you don’t understand the logic behind the software, what its purpose and meaning is supposed to be, then the computer, young or old, can be just as useless. However, unlike modern computers, which become outdated after only two or three years, the Ancient Egyptian temples are built on timeless cosmic principles that applied in ancient times and still apply now and will into the future as well. Therefore, understanding the software, the Mythic Wisdom of the hieroglyphic texts, and its code or philosophy, can make the purpose and function of the temples available now.

The narrative of the mythic teaching as inscribed on the temples and embedded in the temple architecture itself is the software to be known by a true follower of the Ancient Egyptian wisdom. The teaching that the temples seek to impart is the Mythic Wisdom and the code or cipher which unlocks the mythic wisdom, that makes the temple software, the hieroglyphic writings and temple inscriptions, an active and enlightening process is mystic philosophy. It is the Sebait or mystic philosophy that is behind the Ancient Egyptian myths, their wisdom and the architectural brilliance of the temples. Applying that code, the mystic philosophy, to the scriptures, the hieroglyphic texts of the temple, the aesthetics of the temples and their attending tomb, papyrus and other related scriptures activates a universal mythic software, based on all-encompassing cosmic principles, that awakens the spiritual aspiration in the mind of a qualified seeker, a person ready to open the mind and awaken to the greater existence beyond, that the Ancient Egyptians discovered and which applies today and alleviates all ills and leads to the ultimate understanding and triumph of the soul over the trials of life and death.

Therefore, just going to visit Kemet (Egypt) as a holiday visit or as a historical or cultural study is like visiting a museum and being awed by the art there but having no entry into the transformative aesthetic meaning behind its forms and colors or traveling to an island and never going to the beach and diving into the ocean that surrounds it on all sides. Its like having a car and knowing nothing of its mechanical workings or the essence of the elements it is composed of. The car looks great on the outside but if it breaks down then what? Since most people don’t really know how an automobile functions they may make errors that can lead to a crash. Or they might gain some use out of the car, for a time, but at some point they will get stuck. This is the way most people live their lives riding on the surface of life, based on faulty ideas and notions that often lead them astray, going fast in wrong directions, and also into occasional frustrations and disasters.

The Mythic Egypt Wisdom Tour moves from the historical and cultural to the mythic and the metaphysical through wisdom philosophy expressed in the walls and scriptures of the temple to the inner work of the soul to be apprehended in the temple and given birth to in the heart even after coming home from the trip. The inner work of Mythic Wisdom coordinates with the temple vibrations and temple harmonics to promote the same wisdom realizations that were experienced in ancient times. This process allows one to lead a life that discovers the mysteries behind the Ancient Egyptian characters along with the purpose and meaning of life. In this way the mythic scenes and characters inscribed on the temple walls reveal their universal cosmic principles and become illuminating forces to lead the seeker on the journey of life, away from weakness and slavery to the vicissitudes of human existence, and instead towards self-mastery and enlightenment. This is the potential power of Ancient Egyptian Mythic Wisdom when studied with the appropriate guidance, proper understanding and in a conducive environment. Of course, the legacy of Ancient Egypt is still available in present day Egypt and remains the most powerful setting possible to experience the mythic wisdom because there are so many artifacts and architectural structures left and available today in a form that is not available anywhere else in the world.