Neterians are followers of Shetaut Neter philosophy, spirituality and culture. Long ago, before any other civilization on earth arose, the Ancient Kamitian (Egyptian) Sages developed an extensive system of mythology and psychology as a means to assist human beings to develop to their full potential. This philosophy was called Smai Taui or Smai Heru Set (Egyptian Yoga). Who am I and what is this universe? These are questions which have perplexed humanity since the beginning of civilization. However, the Sages of ancient Africa were able to discover the secrets of the universe and of the innermost nature of the human heart. This discovery allowed them to create a civilization which lasted for tens of thousands of years and it enabled the creation of the magnificent monuments (Sphinx, Great Pyramids and Temples, which stand to this day. Also, Ancient Egyptian religion influenced and continues to influence the religions of Africa and other world of today such as Christianity, Hinduism and Islam. So what does this mean for us today? Many people have visited Egypt and have studied the work of Egyptologists but how many have been transformed into higher minded, more content, more powerful human beings who can rise to the challenges of life and aspire to achieve material and spiritual success? Many people have read about and studied Ancient Egyptian mythology but how is it possible to gain a deeper understanding of the mystical principles and how is it possible to integrate them into one’s life so as to transform oneself into a higher being as the texts describe? How is it possible to go beyond the limited understanding of religion and the philosophy of modern culture which have not brought peace and prosperity to the world? In order to Succeed in Shetaut Neter one must also practice the Sema Tawi (Yoga) disciplines. When one practices the disciplines of Sema Tawi in Shetaut Neter this is called Shedy or “Studies and practices to penetrate the mysteries.”

(Teachings Presented in the Kamitan scriptures)

What We Believe and Uphold

(based on the Scriptures and Traditions of Shetaut Neter)

I believe that Neberdjer established all creation on Maat, righteousness, truth, and order, and that my actions, termed Ari, determine the quality of life I lead and experience. If I act with Maat (positive Ari) my path will be free of suffering and pain. When I forget Maat and act in an unrighteous manner (negative Ari), I invite suffering and pain into my life.

As a Neterian I believe when my body dies, my heart’s actions will be examined against Maat. If it is found that I upheld Maat during my lifetime, I will have positive Ari, and my Akhu (spirit) will become one with Neberdjer for all eternity. This is called Nehast, the Spiritual Awakening-Enlightenment. If it is found that I acted with selfishness and greed, I will have negative Ari, and my Ba (soul) will suffer after death and then be reincarnated again to live in the world of time and space again. This is called Uhemankh (reincarnation).

As a Neterian I believe in the teaching of Shemsu, following the path of Shetaut Neter, by practicing the disciplines of Shedy, which include: Study of Wisdom teachings (Rech-Ab), Devotion to God (Uashu), Acting with Righteousness (Maat) and Meditation (Uaa). Neberdjer provided the Shetitu, the spiritual teaching that was written in Medu Neter (hieroglyphic scripture) so that the Shemsu (followers) might study the wisdom teaching of Shetaut Neter. Two most important Neterian scriptures are the Pert M Hru and the Hessu Amun, and the most important Neterian myth is the Asarian Resurrection.

By the practice of the disciplines of Shedy, I will discover the Shetaut (Mysteries) of life and become Maakheru, Pure of Heart. I will become one with God even before death, and I will discover supreme peace, abiding happiness and fulfillment of my life‘s purpose, and promote peace and harmony for the world.

THE GREAT TRUTHS OF SHETAUT NETER

Before starting the study of the Neterian myths it is important to have a wholistic concept of Neterian philosophy. That is, an aspirant should begin to gain an understanding of the integral aspects of Shetaut Neter religion even as the myths and disciplines are studied and as the teachings are practiced. In this manner, the serious aspirant may begin to absorb the wisdom of the teachings by receiving varied elements in small doses so as to comprehend them well as develop a keen intellect and a purified personality.

“The Neter, the Supreme Being, is One and alone and as Neberdjer, manifesting everywhere and in all things in the form of Gods and Goddesses.”

“Lack of righteousness brings fetters to the personality and these fetters cause ignorance of the Divine.”

“Devotion to the Divine leads to freedom from the fetters of Set.”

“The practice of the Shedy disciplines leads to knowing oneself and the Divine. This is called being True of Speech”

The scroll is an elegant and colorful reproduction of the four essential teachings of Shetaut Neter, designed for placement at the personal altar and daily reading or for being framed and displayed for daily reading. 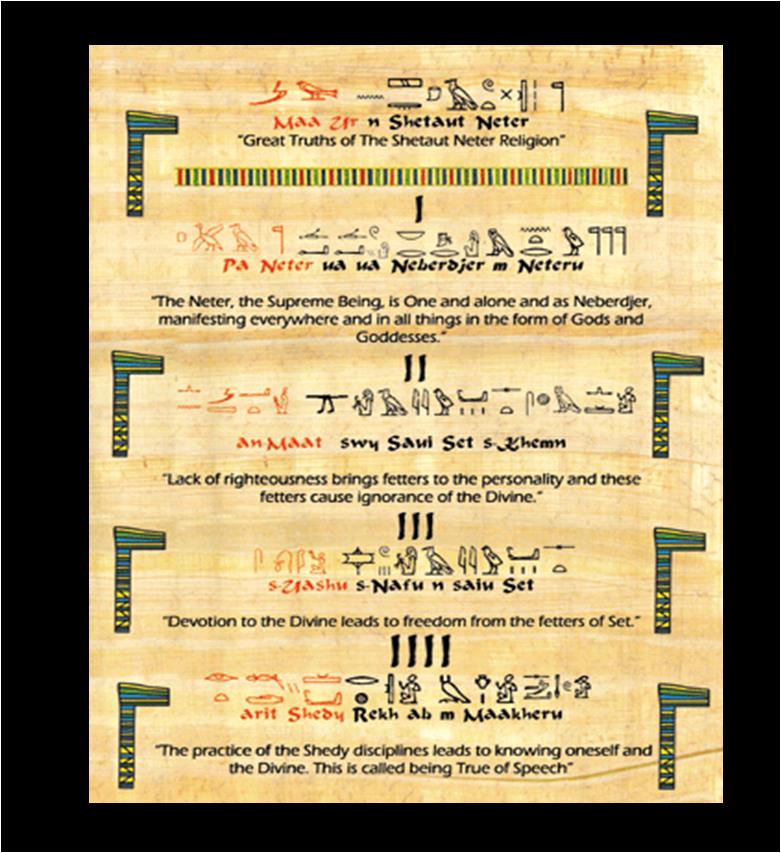